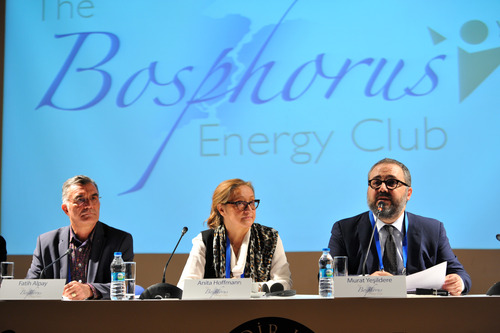 Young leaders from the all over the world gathered in Istanbul for the inaugural “Young Leaders of Energy” event at Kadir Has University on December 9, 2015.

They had been selected from a long list of applicants for their interest in and innovative approach to several key energy topics, ranging from “How would I invest 5 million dollars in Energy” to “Energy and Diplomacy”.

Anita Hoffmann was invited to lead the penultimate panel on the topic of: “What do we expect from you as young leaders and what can we offer you” together with Murat Yesildere of EZI Turkey.

Over the day the Young Leaders (all under age 35) had the unique opportunity to interact with Ministers, Diplomats and CEO’s via panels and in person during breaks. They were e.g;

The best entries were awarded prizes and Yan Mi, from Beijing won first price for his energy efficiency technology start-up for home appliances.

The winners in each category were invited to run a “Young Leaders Panel” in the main Bosphorus Club meeting the following day with media as well as business executives and ministers in the audience.

More information on the event can be found here: http://bit.ly/1TrfKUQ

And the winners of the various prize categories here: http://bit.ly/1OgyEN1