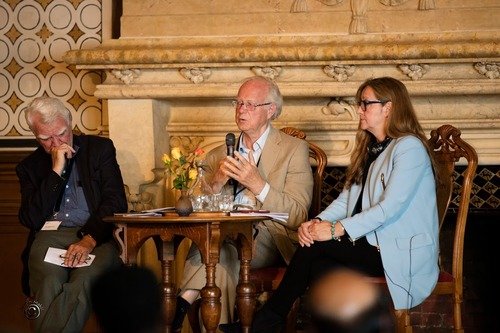 ‘Catalysing new models of economic leadership’ was the headline for the 10th anniversary IofC (Initiatives of Change) TIGE conference in Caux, Switzerland, July 2016.

The poignant opening keynotes were on the topic of corruption, how it holds back development and how it can be combatted by organisations by full transparency of e.g. payments to governments, delivered by two giants in this field, Sir Mark Moody Stuart and Lawrence Cockroft.

Sir Mark is the previous Chairman of Anglo American and Royal Dutch Shell, instigator of the Extractive Industries’ Transparency Initiative (https://eiti.org) and one of the first Directors of the Global Reporting Initiative (GRI).

Lawrence Cockroft is one of the founders of Transparency International, the global anti-corruption coalition (https://www.transparency.org)

A write up of this session can be found on the IofC TIGE webpage at: http://bit.ly/2g1nJjV